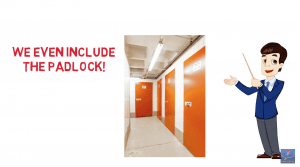 3D space storage offers self-storage facilities in central London. They came to us looking for a ‘hero’ video that would quickly explain their services to any potential clients who visited their website. They were keen for a video that would convey its message whether or not the sound was activated. They were also clear that they wanted an animated video (possibly a whiteboard video) that was fun and would quickly grab the viewer’s attention.

3D Space Storage was very clear about what they were offering and how they wanted it to be conveyed. We prepared a script and storyboard for the video and then offered 3D Space Storage a choice of animation styles. We offered an initial outline of the video in both formats and allowed 3D Space Storage to choose which one would be developed further. You can see both styles of video below.

The client preferred the simplicity of the whiteboard animated version – and instructed us to develop that version for final delivery.

Within two weeks of the project beginning we had scripted, storyboarded and animated two options for 3D Space Storage and developed one of these videos to completion. The final, completed video can be seen below. The video will shortly be embedded on the client’s website and we look forward to hearing the results of their new video animation. We’ll update this video marketing case study in due course once we know the full results.