How we got 100 qualified prospects to this launch event 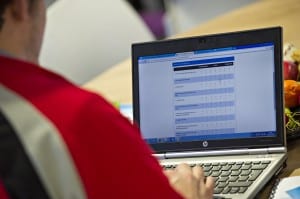 Tandem is a coaching app and service for athletes and coaches, developed by academic experts in the field, at Loughborough University.  The programme produces reports to help high performing athletes improve their relationship with their coaching team. It has a very specific market among athletes and their coaches at the top of their fields, and so required a very focused social media marketing campaign. Tandem approached Saucy Horse during the planning stages of their launch event.

They had a very clear brief – they wanted to attract over 50 elite athletes and sports coaches to their launch event at Loughborough University in 3 months time. By the time we started work, the the event was only 9 weeks away. So time was of the essence.

We worked with Tandem to establish the persona of their perfect prospect. Once we had defined this,  we created a LinkedIn profile for the academic behind the project, Dr Sophia Jowett, and used this to invite highly targeted people to the event. We also created a Twitter profile, which we used to identify accounts with high value followers that could share the event with our prospects.

A large part of our time was spent on LinkedIn. We optimised the academic’s profile so that we were searchable for relevant keywords. We posted videos on the profiles as this is highly beneficial to SEO for the keywords around this product. We identified potential attendees based on the client’s criteria and invited them to connect on the basis of relevant information they would find useful in their day to  day roles. After the connection was accepted, the person was invited to the event with another message and sent to optimised landing pages for sign up.

On Twitter we followed a strategic plan to follow qualified prospects and influencers, conversed regularly with accounts whose followers would be interested in the event and then engaged directly in conversations with prospects about topics they were already discussing. We also created a full programme of content designed to attract our target audience. All activity was designed to drive high value prospects towards sales funnels for the event.

The day of Tandem’s launch at Loughborough University saw the worst snow storm of 2015 so far. Nevertheless, over 90 people attended the final event of the 106 who had registered, some travelling from as far afield as Glasgow and Southampton. Another 10 people who were unable to attend the event indicated they were interested in further information. The attendees and respondents included representatives of:

The event was a great success. The team at Tandem had the chance to demonstrate their product to a room of very high value prospects and to gain valuable feedback from their target audience. Not only did we recruit very valuable prospects for the event but we also established contact with valuable decision makers at key sports bodies and organisations who, despite not being able to attend the event, were very interested in Tandem and talking further about using it. We have therefore delivered a qualified and engaged list to our client for nurture towards purchase of the product.

Dr Sophia Jowett, the academic behind Tandem, was delighted with the results. She said

Want to know how we could help you prepare and run a standout B2B or B2C social media marketing campaign or event management campaign? Call us on 0333 011 3389 or contact our digital marketing scientists.

Wondering how you could achieve the same in your business? We’ve put together a report with some of our top social media marketing tips. You can download it right now by completing the form below.